My wife and I we don’t ‘do Valentine’. We don’t seem to be very representative for the country we live in though, as data shows that celebrating Valentine’s Day is more popular in Belgium than anywhere else in Europe. We’ve done a survey on that topic (together with Cross Tabs) on MSN/Windows Live in 16 EMEA countries which had over 78.000 respondents (Updated with link). We thought that with Valentine’s Day coming up it would be interesting to find out how flirting & dating has evolved in the digital age that is the 21st Century. And given the current crisis we were also curious how much that would impact your Valentine’s celebration. All of that resulted in some interesting data and I decided to put the key highlights in a presentation for your viewing pleasure:

People clearly find it easier to say ‘I love you’ over email, IM or txt messages than face to face as also this research points out (from the press release):

“The majority of people across Europe (66%) admit that they find it easier to flirt over IM than face-to-face, with shy South Africans much preferring this method of flirting (78%) closely followed by Arabia (77%), Turkey (76%) and Ireland (72%). Saying ‘I Love You’ for the first time is never easy, so it comes as no surprise that 1 in 3 have actively declared their love for someone over instant messenger rather than face-to-face. Cupids in the Netherlands (61%), Denmark (42%), Portugal (41%) and Spain (40%) top the league table for saying ‘I love you’ in cyberspace.”

Like I said earlier we also looked at how much impact the recession would have on the spending for Valentine’s Day and although that day is traditionally a time to ‘splash some cash’, spendings in most countries will fall by almost 10% on average (see table below). I couldn’t help noticing though that European men spend on average 33% more on Valentine’s Day than European women ;) 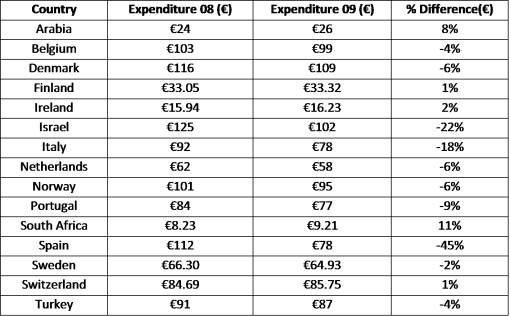 There was a lot more data about this per country and everything which I obviously can’t all post here, but I should be able to point you to the right direction in case you’re wondering about more details (participating countries in the table above btw.). Once I get a link to the press release (which has also more data) I’ll add it right here as well.

Update: Here’s the press release with some additional data