Posted in June of this year, the cartoon below is probably yet another one of Hugh’s classics. I don’t think ‘creativity’ is a dirty word for big companies, I actually believe it’s pretty popular. Still I agree with the point that Hugh is trying to make. I hear a lot of talks about ‘creativity’ at the start of a product/campaign, but once things start going it seems like creativity is the first out of the door.

So get over to Hugh’s gallery and buy this print so you can hang it in your office ;)

One of the perks of being unemployed is that you actually have time for a few things that you didn`t really have time for before… like reading books for instance, so that`s what I`m doing… well one of the things I`m doing – looking for work is another one ;) One book I read a couple of days ago was Hugh MacLeod`s upcoming “Ignore Everybody” of which I had received an advance copy thanks to Hugh and the fine people at Penguin Group. 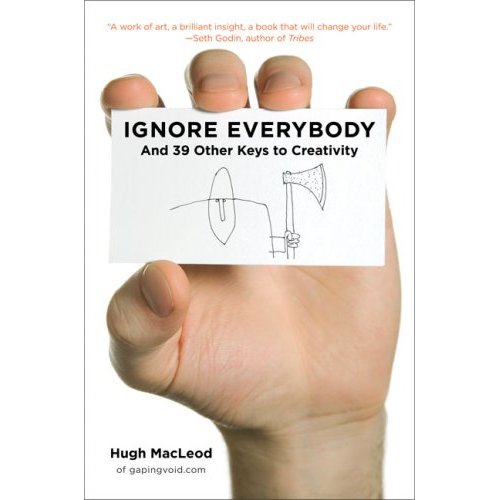 Long time ago – while reading something on Hugh`s blog – I stumbled onto a series of posts/writings that were all tagged with “How to be creative”. It was a good read, so finding out it the content was also available on a free PDF on changethis.com made it even better. More than 1 million downloads don`t lie of course, I still have a printed copy of that PDF right here. When Hugh mentioned he got a book deal on this which involved writing some extra chapters I was a bit sceptical though. I totally loved the series but all of that stuff had come about quite organically, there`s a difference when you write things when you think about them basically whenever you feel like it… or when you have to write chapters for a book. Hugh proved me wrong about being sceptical, there`s now way you could tell which chapters where there first or which ones are new, the book is rock solid. It`s an easy read in the typical style of Hugh MacLeod – unique, smart and funny – and with a good dose of cartoons in them. My favorite one in the book? Especially while jobhunting… is this one (from 2006): 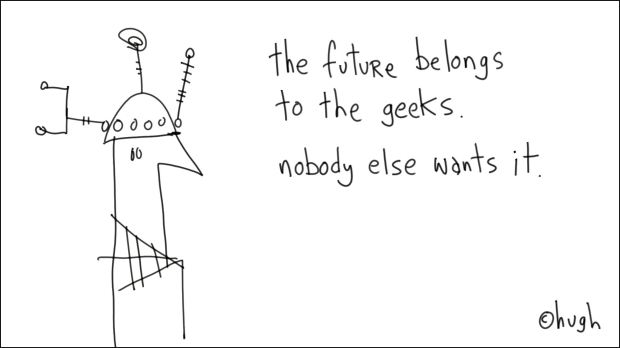 So pre-order the book now, you won`t regret.

Next week we’re heading to Paris again for what is probably one of the most exiting tech/web events in Europe: LeWeb. This year Microsoft is the main sponsor and so make sure you come and check us out. And while you’re at it, bring your business cards as Hugh Macleod will be a regular guest and he might just end up drawing a cartoon on the back of it ;)

We’re also going to bring some Blue Monster Sauvignon Blanc with us but more on that later. For those that would like to get a chance to get one of those right now already, I’m actually going to give away 6 bottles right here, right now. (that is 1 bottle per winner to be clear). All you have to do is let me know in the comments why you should win it. By the start of LeWeb next week I will pick the winners (with the help of Hugh) out of the hopefully numerous comments ;) Make it original. Oh and just so you know, these bottles aren’t for sale.

Come and say hi if you’re going to be at LeWeb. Go here if you’re interested in finding out more about the Blue Monster.

It seems to be quite appropriate that the 2nd anniversary of the Blue Monster coincides with Steve Clayton’s birthday as Steve has been crucial  in getting the Blue Monster where it is today. Hugh Macleod has a nice little write-up about the Blue Monster history, well worth reading. For me this story started at a similar time that I got to know both Hugh (we met for the first time at LeWeb 2 years ago) and Steve and that’s how I got affected by our little blue friend. It was good getting to know all three of them.

In his post Hugh refers to what David Armano had to say about the Blue Monster, something he wrote after he and I met at MIX08 in Vegas:

“What’s to be learned? Blue Monster shows us that no matter how big or small the company that the world is a bigger place. And external influences can become internal influences. And it teaches us that if we are interested in the evolution of corporate culture, that symbols are important. If we don’t find our own—someone will find them for us.”

Even more, the Blue Monster became an example of how companies can embrace social media. It has become an example of how a company (or anybody for that matter) can benefit from letting go of control. Just read through Rohit Bhargava’s “Personality Not Included” for instance, or the more recent “Crowd Surfing” from David Brain.

Hell no, the Blue Monster is not dead – it’s alive and kicking, not only within the spirit of many Microsoft employees but also outsiders are starting to see change. And did you read Hugh’s 7th point? Well the Blue Monster is going to Paris… but more on that soon ;) For now, it’s just happy birthday.