Well not really but it just seemed the right title for this post. Just tonight I stumbled onto 2 posts that are related to law and that are in some way upsetting. The first newsitem is about France pushing through a law that would force Apple Computer to open it’s iTunes online music store and enable consumers to download songs onto devices other than the iPod. I guess the strangest part of this is the following:

“It would no longer be illegal to crack digital rights management–the codes that protect music, films and other content–if it is to enable the conversion from one format to another, said Christian Vanneste, Rapporteur, a senior parliamentarian who helps guide law in France.“

What does that mean to DRM in the future, whatever it’s from Apple, Microsoft or any other player in the market? I don’t always understand what legal councils in countries think they need to do versus succesful businesses, you can’t blame them they came up with a great idea can you? I would love to see the iPod and/or iTunes to open up to other technology but I don’t think we should force them into that if they aren’t up for it.

The second newsitem is about the Sony Playstation Dualshock controller.

“Just to bring you up to speed: Immersion, a company specializing in haptic technology, in 2003 sued both Sony and Microsoft for patent infringement, claiming both companies used Immersion’s intellectual property (IP) in their console’s controllers. Microsoft settled out of court (buying a share of Immersion in the process), but Sony fought on. Sony lost, and the judge ruled that Sony must suspend the sale of “Playstation consoles, Dualshock controllers,” and a few dozen games, including Vice City, Final Fantasy X, and Metal Gear Solid 2. Sony filed for appeal, and has been allowed to sell all aforementioned products while the decision is under appeal.“

The appeal was denied so it remains to be seen what the future of the Dualshock will be. After the earlier rumours about the PS3 delay, this too won’t do Sony Playstation any good. It sure looks like this is going to cost Sony quite a lot of money.

I’ve seen some new and pretty cool advertising from Absolut Vodka the last few days which made me look for other Absolut stuff on the web. A few days ago we saw the first posts talking about Absolut Kravitz. I’ve never been much of a Kravitz fan, but it still is a really nice experience. Check out the Absolut website too by the way.

Everybody knows the Absolut Ads and while I was looking for the Ad you see with this post (created during the Y2K period) it seems there are even more than one fansites about Absolut and it’s advertising. Should have known, but never thought of it really. The best one I think is Absolutad.com, that has an immense archive of old Absolut creatives. Funny enough, while looking on the web I also found out that they’ve just decided to stop with the ads using the shape of the Absolut bottle (article USA Today).

After 25 years and 1,500 versions of print ads built around the shape of its bottle, Absolut vodka is shelving the campaign that made it famous. Absolut will spend $20 million on a new effort that starts today and includes its first TV ads as the brand battles slower growth and tougher competition for vodkas.

Well if the Absolut Tracks project is the first sign of what they’re going to, bring it on then! I’m pretty sure anyway that they will come up with some great campaign ideas that will replace what they’ve been doing the last 25 years.

Also make sure to take a look at Absolut Temptation, got to love it! [Via Coolz0r]

Someone asked me last week where I got my blog’s name ‘Cross The Breeze from. It’s actually a name from a great song of Sonic Youth featured on the album Daydream Nation. I bought the LP in 1992 in Moskow when we were over there with a group of students. I knew a bit of Sonic Youth at that time and wasn’t a big fan or anything, but the album was sold at 0,01 €… Useless to say that we all bought a bunch of LP’s when we were over there, anything of which we recognized the cover or the band’s name, we bought it.

Daydream Nation however is the best album of all I got back then, well it’s one the best albums I’ve ever bought actually. Songs like Teen Age Riot, Silver Rocket, ‘Cross The Breeze, … that’s true rock ‘n roll. I bought the CD version a few years ago because the LP was a bit difficult in the car, plus the Russian LP version – as I found out later – was shorter than the original US version. I don’t know a lot of people that like it, but I think it’s absolutely great.

This is actually a really cool online music experience. Create your account with Pandora and start creating your own music stations. How does it work? You create a station and start adding artists or songs to it that you really like, from then on you will be able to listen to it and it will mix your artists and add a bunch of music to it that is very related to what you’ve entered. Especially the way how add music to the list, and how it relates to the artists you entered is really good. Start discovering a lot of cool music today and signup. Thx to Matth for flagging this service! 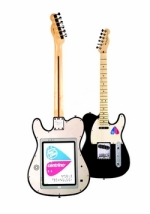 Fender has a great history in electrical guitars and is probably known most for the Stratocaster and Telecaster models. Two recent blogposts about Fender products give the impressions they’re going digital. Check out the Intelcaster, a project of Fender & Intel. They figure any musician whilst creating a song has a need for information, so he can now just flip his Telecaster and surf the web.

Another nice plaything is the Speed-e that is basically a keychain tuner for your guitar. You can tune the basic E and then it’s up to you to do the rest by ear.