The big idea is dead. To quote Patricia McDonald in a recent Campaign article: “In recent years, the “big idea” has often seemed to epitomise everything wrong and backward-looking about our industry.” And that’s indeed true. In the traditional sense of a 360 campaign, the big idea was to be found in the 30″ commercial or a huge online activity and every other aspect of the campaign had to amplify that centre piece. The big idea was almost not much more than the ever so popular ‘key visual’, the one visual we can translate in all our media for one given campaign. 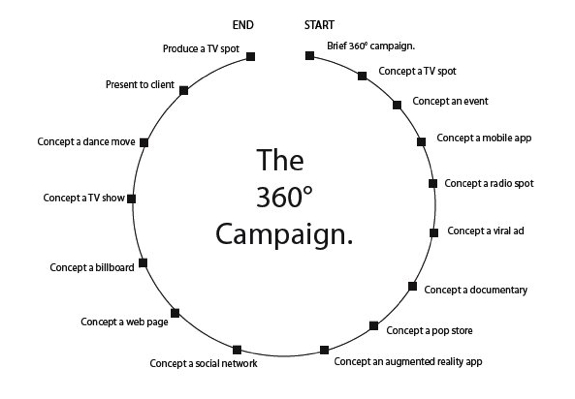 It’s good that we most brands start to work differently these days. It’s good that brands start to understand that this idea of a 360 campaign all built around the one big idea isn’t the right way to operate. But as Patricia also highlights in her article, that doesn’t mean we should start thinking small. And therefore the big idea is still very much needed, only we think about something completely different today when talking about a big idea than when we talked about it a few years ago.

Today (and as a matter of fact we believe for the last few years already), that big idea is more of a central thought, a thought that allows you to develop a creative platform in which several small & big creative ideas can be found. It’s a thought that is based on a strong insight and for which the creatives feel the potential, a thought that offers a fertile ground to start creating. Because let’s be honest, ideas can be small and very beautiful or extremely big, bold and complex. But the overarching thought can only be big. It’s linked to the brand’s raison d’être, the link with the purpose and therefore the relevance of the brand in people’s lives.

Once this ‘big idea’ is defined, once we all agree on what that central thought or creative platform is that a brand needs, the quest for the ‘key visual’ becomes less important. It’ll help them understand for instance in the case of Nike that Nike+ as well as ‘Find your greatness’ can be part of the same campaign. In the olden days that would have been near to impossible since they would both feel like big ideas in the classic definition.

So maybe we shouldn’t be using the phrase ‘big idea’ anymore knowing that it has for long meant something else, something that we feel isn’t right anymore today. But whatever the phrase you come up with, let’s all agree that we shouldn’t start thinking small all of a sudden.