For real. So the site is still up and running (don’t worry about that!) but it is clearly becoming a trend to bring some of the key Facebook characteristics to the real world. The examples below are perfect proof of that.

During summer Coca-Cola in Israel introduced “The Real Life Like”. Together with Publicis E-dologic they figured out a way to embed user data in IDF bracelets, and thus allow people to “Like” real world objects, places and events spreading the word about it on their facebook accounts.

“The implemented these facebook-bracelets at the Coca Cola Village, a watersport, sunbathing, gameplaying amusement park activity-thing for teenagers. When the guests arrive, they are given a ‏ bracelet ID which transmits an RFID signal, which they program with their facebook login. They can then “like” activities and places in the real village, and their actions show up on facebook. Teenagers are driven by vanity like everyone else, so there was a photographer present as well, if you wanted to tag yourself in any given image all you had to do was wave your ID bracelet to the photographer.” 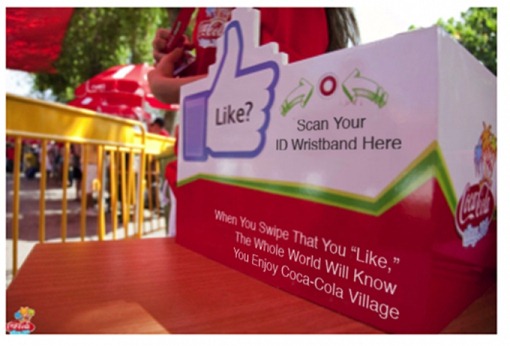 Probably sometime during the same period, Diesel introduced Facepark aka The Analog Version of Facebook as part of the Be Stupid campaign. Go outside, speak with actual humans ;) Definitely my favorite of all these examples btw, just watch the clip if you haven’t seen it before:

As part of that they also invented the Facebook Ass Status, no sign of that being used within my network yet though :)

The last example to pop up onto my screen is this one from Saatchi & Saatchi in Budapest: Taking Facebook to the streets for T-Mobile:

“At a busy downtown square in Budapest, they painted a Facebook wall(it was not an LCD screen). when users update messages on the online, they will manually place the messages with caricatures on this street wall.”

Not the most brilliant example if you ask me. Anyway, if you’ve seen other examples that would fit this trend, let me know in the comments.