Today Microsoft announced the launch of a local search component that will add a 3D element to the maps in http://local.live.com. You need to download the component, but after that you’ll be able to get 3D imagery in your browser (IE only) from 15 cities in the US which will expand soon. The imaging technology used is from Vexcel Corp. which Microsoft acquired earlier. 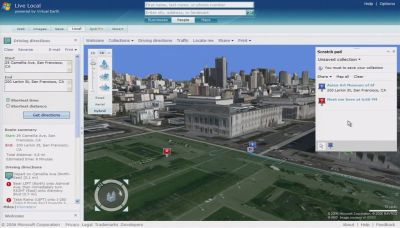 I also like the idea of advertising in there. VE 3D will come with a functionality developed by Massive (a company Microsoft acquired in May, known for in-game advertising) that will let advertisers buy virtual billboards in the 3D environment. C|Net reports that some advertisers are in a pilot already:

“But Virtual Earth 3D does include fixtures that might not necessarily be visible in the real world: “virtual billboards” float above buildings with advertisements on them as part of a pilot advertising program, said Stephen Lawler, general manager of the Virtual Earth group. For instance, Fox has a virtual billboard hovering above the AMC cinema in downtown San Francisco. Other advertisers are Nissan Motor, Zip Realty and John L. Scott realty.”

Well I’m excited, I hope I find some time the next days to have a look around but I think it looks good. (Disclaimer: I work for Microsoft).

Here’s some more about it, including images: